*History and image provided by the Adams County Historical Society 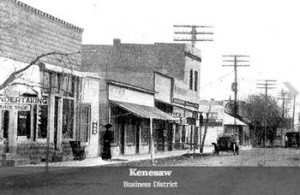 Kenesaw, like many other towns in Nebraska, was laid out by the railroad, in this case the Burlington. Harvard, Inland, and Juniata were part of the Burlington alphabetical naming system. The next town on the line was Kenesaw, named after the Civil War battle of Kennesaw Mountain, Georgia. The town site was located June 9, 1871 by S. P. Howland, Milton F Brown, Charles Colt and J. D . Butler, Jr. who preempted the four quarters of section 34, and later sold their claims to the South Platte Land Company a subsidiary of the railroad.

Mr. Howland later reminisced “I sent teams to Grand Island for lumber to build a shack and it was built that month, June. The first five nights I spent upon the site of Kenesaw, it rained every night and I slept under an inverted wagon box. Our drinking water at first had to be hauled from Lowell, ten miles to the west, but a well was bored about the third day after we arrived. Antelopes and coyotes used to come close to our cabins and we could shoot them from our doors. That fall, two families came to live near our houses,”

In June, 1872 when the Burlington railroad built through town, Kenesaw was surveyed. The avenues were named for members of the South Platte Land Company. The streets were named for trees.

A.D. Williams, the first permanent settler, arrived in August, 1872 in a covered wagon. For the first three weeks his family lived in the wagon box on the prairie, setting their cook stove outside. Their first visitors were Pawnee Indians returning from a hunt on the Republican.

Mr. Williams was a preacher, teacher, and newspaper editor. His wife was also educated and the two filled a large place in the life of Kenesaw for the first two decades. He became Kenesaw’s first postmaster in December, 1872 with his sister, Mrs. Norton, a woman homesteader, as deputy. He started the Kenesaw Times in 1875 and helped establish the Freewill Baptist church. A.D. Williams died in Kenesaw in 1894.

Josiah Hodges opened the first general merchandise store in August, 1873. That winter his child, Jessie died, the first known death in Kenesaw. He soon left Kenesaw but others followed and soon a grocery, hardware, blacksmith and general store were in operation.

The first bank in town, the Bank of Kenesaw, was established by E.P. Gillette about 1883 and closed by 1894, a casualty of the 1893 depression. The Exchange Bank was established by 1884 and First State Bank was incorporated in 1908. The banks merged in 1929 and First State Bank closed in 1933. Adams County Bank opened in 1934 after the merger of the Juniata and Prosser banks and has been a major factor in the growth of Kenesaw.

The Cottage Hotel was erected in 1887 on North Depot Street across from the Burlington depot. It was razed in the 1971 and the site is now Kenesaw Motor Company’s parking lot.

The first brick building was erected in Kenesaw in 1902 by F.S. Cary at the corner of Smith Avenue and North Railroad Street. The building was demolished in 1992 to make way for the Kenesaw Korner Convenience Store. Bricks from this building were used in the Kenesaw Welcome signs.

Kenesaw Telephone Company was organized in 1904. In 1916 the monthly rate was $1.25 with free service to Juniata, Prosser, Heartwell and Holstein. Dial equipment was installed in 1957. After the modernization party line customers heard only their own ring. The company was sold to the Lincoln Telephone and Telegraph Company in 1966.

J.M. Sewell built an elevator south of the depot along the railroad tracks in 1884. That elevator was purchased by the newly incorporated Kenesaw Mill and Elevator Company in 1916. Turner Grain later operated an elevator at the site which was torn down in 1993. F.S. Cary operated a grain elevator west of Sewell’s elevator on the south side of the tracks. It was later owned by Frank Real and burned in 1928. Kermit Huyck moved an elevator from Prosser to this site about 1950. It was torn down in 1973 and a steel one which still stands built on the spot. Whitely Milling Company was incorporated in 1916 and erected a large flour mill south of the tracks at the corner of Forbes and South Depot street. The mill was gutted by fire in 1919. Kenesaw Elevator marketed flour under the name Primrose. Whitely mill milled and sold Meadow Gold flour.

In 1928 the two story Burlington railroad depot which dated from 1884 was replaced by a one story depot building which was demolished in 1982.

The years 1915 to 1930 were probably Kenesaw’s most prosperous. All necessities and many luxuries could be purchased in Kenesaw. Two banks, two drugstores, two doctors, a small hospital, two hotels, weekly newspaper, and numerous businesses of every kind were in operation. Four passenger trains daily, plus several freight trains stopped at the depot.

Kenesaw, along with the rest of the country struggled through the drought, dust storms and depression of the 1930s. Federal relief projects built the city auditorium and the sewer system. As with all small towns it was the automobile that contributed to Kenesaw’s decline as a commercial center. But ironically it is an auto dealership, Kenesaw Motor Company, which is the oldest business in town having been established in 1921 by Walter Denkert.

The 1940s were the years of the war effort. Rationing, and much of the workforce in the service resulted in few changes. Kenesaw streets were graded in the late 1940s.

Main street was paved in 1955 and 1956. Kenesaw Oil company rebuilt its service station following a fire in 1955 and Turner grain built steel grain bins in the 1950s. In 1959 the American Legion established a youth center in their basement.

The two biggest news items of the 1960s were the construction of Haven Home in 1965 and the big flood of 1967. About 1960 Dr. Mastin, the last resident doctor, moved to Hastings. A clinic was operated for a few years by doctors from Hastings. Jackson Funeral Home moved into the clinic building in 1966. Cuprem Inc. was established in 1965 and Turner Grain built a fertilizer plant in 1968.

Kenesaw enjoyed a building boom during the 1970s. The swimming pool was built in 1971 and Kenesaw Motors new building in 1973. A dike at the north edge of town to hold back future floods and many new homes were built during the decade.

The town’s population remained about 800 during the 1980s and 1990s. The lumber yard closed in 1987. Numark which produces control systems opened in 1991. Kenesaw Senior Center and Kenesaw Korner were constructed in 1992. Heartland Co-op began operating the fertilizer facility and Scoular elevator was demolished in 1993. Renewed Resources which makes pallets and wood chips opened in 1993. Kenesaw welcome signs and a new water tower were erected in 1995. H&N Mobil the only full service gas station closed in January, 1997.

School District 3, Kenesaw, was formed in January, 1872. In early 1873 there were 27 children, but no school due to controversy about the site, north or south of the railroad. The north won and the first school opened in December, 1873 with V.W. Miller as teacher. A two story frame building was erected in 1874 which, with a north extension added in 1887, served until 1912 when a brick building was erected. These buildings both stood where the Haven Home is currently located. The first high school class, composed of three members, graduated in 1892 from the tenth grade.

From 1912 until 1950 a course of normal training was taught in the Kenesaw High School. A third grade elementary certificate could be obtained by completing the course and passing the state exam. The certificate allowed a high school graduate to teach in a one room single teacher school. Over the years approximately 200 Kenesaw High School students completed the course.

During the 1950s several rural districts consolidated with Kenesaw forming district 3R. In November, 1960 Kenesaw voters approved a $405,000 bond issue and the current building was constructed at the east edge of town. Three additions have been made to the building, the most recent in 1996.

Over the last 125 years eight religious congregations have been organized in Kenesaw. Four of them, the United Methodist, Sacred Heart Catholic, St. Paul’s Lutheran and First Presbyterian are still active.

Until 1883 all religious denominations worshipped in the school house. The Methodists, first to organize a congregation, were served by Juniata’s pastor until 1884 when J.G. Walker became their first resident pastor. In 1892 a Methodist church was erected, it burned in 1894 and was rebuilt immediately. The building was extensively remodeled in 1951 and a new parsonage built in 1962. In 1969 the church became one of a three charge parish with Heartwell and Holstein.

First Presbyterian Church of Kenesaw was organized in 1879 and built a church late in 1884. A basement was added in 1927 and the building remodeled in 1962.

The first church building in Kenesaw was built in 1884 by the Freewill Baptists who had organized in 1883. A.D. Williams was the first minister.

St. Paul’s Lutheran Church was organized in 1904 and a frame building was erected that same year west of Forbes Avenue. In 1906 Rev. Niermann became the first resident pastor. A parochial school was opened in 1906 and continued until 1968. The current brick church was constructed in 1917.

The Nazarene Church was organized in May, 1911 with 31 members. By November a church had been built on South Doane Avenue. In 1946 the building was moved to the Christian Church site and a basement added. A new parsonage was built in 1949. The church closed in 1984.

Sacred Heart Catholic Church was dedicated in June, 1909. The congregation is still active with about 15 families, but has never had a resident priest.

As soon as the settlers had homes built and land broken they began to organize social activities. The earliest gatherings were in homes, store buildings, school houses and churches. The first women suffrage group in Adams County was organized in Kenesaw in 1882 by Mrs. M.A. Brass. It was active until 1920. A Grand Army of the Republic (GAR) lodge was organized in 1883. Known as Mathias Post, its members were union veterans of the Civil War. Masonic Lodge No 144 was organized in 1885. In 1942, Juniata Lodge No 42 merged with it. After the flood of 1967 which ruined the lodge hall it merged with Hastings Masonic Lodge. Other early lodges included A.O.U.W., Degree of Honor, Women’s Christian Temperance Union, Odd Fellows, Knights of Pythias, M.W.A., and Royal Highlanders.

Kenesaw Federated Women’s Club was organized in 1954. One of their major projects was the purchase of the Susan Hail grave site, along the Oregon Trail, and the erection of a historical marker near the site.

The American Legion Post was organized in 1946 with 32 members. J.O. Budd was the first commander. The post sponsors Boy Scouts and baseball programs.

The Lions Club disbanded in 1968 and its members formed the Kenesaw Community Club. The community club recently sponsored the erection of Welcome signs at Kenesaw’s entrances.

Kenesaw has had its share of disasters. Fires in 1907, 1911, and 1916 destroyed many business buildings. But the most devastating disasters have been floods. 1873, 1901, and 1912 were flood years, but the biggest flood was June 13, 1967. 23 inches of rain in two weeks resulted in three feet of water over most of the town. The city water supply was contaminated and many residents were forced from their homes. The National Guard and the Red Cross set up emergency operations in the high school. People from all the surrounding communities helped in the clean up. Many community records were lost when the bank basement where they were stored filled with water.

From the four pre-emptors dwellings built in 1871, Kenesaw has grown to 335 residences in 1997. Unlike many small towns, Kenesaw has enjoyed a stable population which is about 820 today. Kenesaw is the only village in Adams County with its own high school. It also boasts a nursing home, swimming pool, senior center, auto dealership, bank, and many other shops and services not available in small towns.